Valley: Helen Briem and Tim Wiedemeyer also win the dance of the champions

In the women's competition there was an outstanding start-to-finish victory, in the men's competition the winner played a fantastic final round: The second edition of the Dross&Schaffer Schäffler Tanz International Open at the Munich Valley Golf Club also featured top-class players, and this time it also offered numerous spectators golf at a top international level. The mighty winner's trophies were secured after 54 holes by Helen Briem from Stuttgart's Golf Club Solitude and Tim Wiedemeyer from Munich GC. 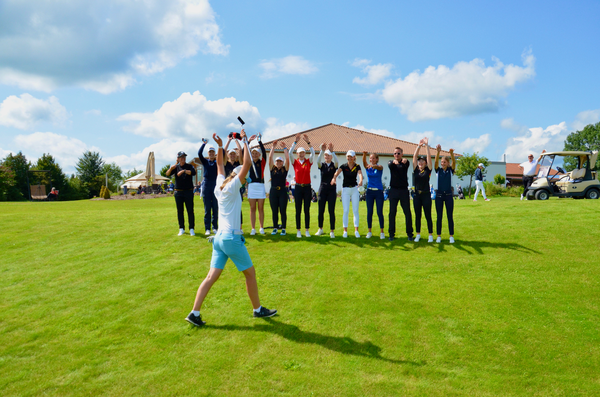 It really felt like a German U18 Championship - there were a lot of strong players competing, and it was unbelievable fun to play on this great course in such good competition," Helen Briem was pleased with her outstanding performance in Valley. After 54 holes and rounds of 67, 70 and 68, the 16-year-old player from Stuttgart's GC Solitude had a total of 11 under par, no less than seven strokes ahead of Charlotte Back (69, 73, 70/-4) from GC St. Leon-Rot; third place went to Philipa Gollan (74, 74, 78/par) from Lübeck-Travemünde Golf Club. 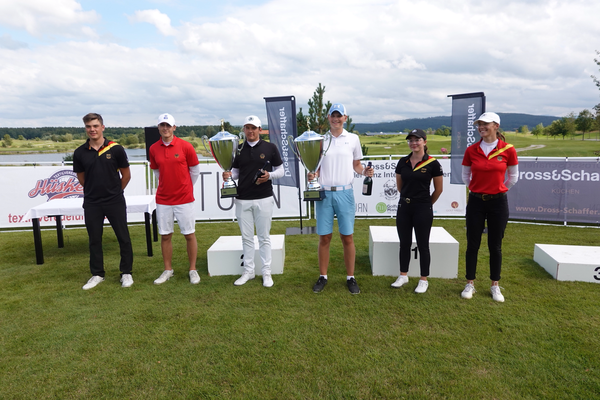 Helen Briem impressed from day one with her excellent long game and had the extremely challenging par-72 course at GC München Valley under control at all times, as did the competition of 32 players. "I switched from graphite to steel shafts at the beginning of the year, and since then my shots have become much more precise," said the winner. As a result, even the wind, which was strong at times in the first two rounds, did not affect her game, and the fact that the balls also hardly rolled in rounds 1 and 2 after heavy rain also suited the long hitter. "I teed off very often with my woods and was able to control the ball well with them." The best example: on hole B1, a 480-meter par 5, she sent her ball 250 meters from the tee with the 3-wood and then put it three meters to the flagstick with the hybrid from 230 meters. She narrowly missed the eagle putt, but the tap-in for birdie impressed even the competition. "I like this course, I like Valley extremely well," said Helen Briem. "Of course also because of the length, but the course itself is just beautiful as well."

Especially when you can compete with the confidence of a winner of the 2021 European Young Masters, which Helen Briem won in Finland in July, proving that she is currently the strongest player born in 2005 in Europe. She won the unofficial Junior European Championship there by two strokes, playing an eagle on the last hole. "The win in Finland was very good for my confidence, and to win here in Valley now with a seven-stroke lead, of course that also feels more than good," said the reigning German hole play champion. And at least one more title could be added to her impressive collection this year: Next week, Helen Briem will fly to the Ping Junior Solheim Cup in Ohio, USA (September 1-3) as part of Team Europe - with the best possible credentials in her luggage, including the title of the top-class Dross&Schaffer Schäffler Tanz International Open 2021. Helen Briem: "It really is a mega tournament, and it's great that Valley and Danny Wilde launched it last year. In the future, if it's held at the beginning of the season as actually planned, it's really a superior kick-off event for our wagering season." 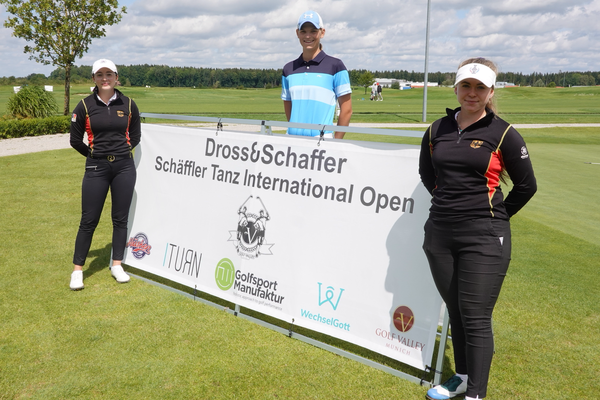 And that's exactly the plan: starting in 2022, the Dross&Schaffer Schäfflertanz International Open will take place in June, "the exact date will be determined as soon as the German Golf Association's betting calendar is finalized," says tournament director Danny Wilde. "We launched this tournament last year to provide a competition platform for young talent. But we definitely want to keep it in the future and make it a permanent fixture in the annual calendar of the best players in Germany and Europe," Wilde said.

National coach at the start as an observer

The fact that the event already enjoys a high reputation is shown not only by the well-stocked fields of participants and the numerous spectators, but also by the presence of the two national coaches Christoph Herrmann (boys) and Sebastian Rühl (girls), who visited the tournament in Valley and accompanied their national players and members of Golf Team Germany. So it will be continued, although a change in format is being considered for 2022: Wilde: "Maybe we'll do a match play, but perhaps also a tournament specifically for the AK 16 and AK 14 age groups - there are currently far too few of these in Europe. In any case, however, the Dross&Schaffer Schäffler International Open will continue."

In the Corona year 2020 inspired by the Munich Schäfflertanz and initiated and organized by the founder of Valley-based Golfsport Manufaktur, Danny Wilde, as well as Valley youth director Max Röger, the second edition of the Dross&Schaffer Schäfflertanz International Open also turned out to be an outstanding success. "I am very pleased to see how the top young talents develop each year and clearly always enjoy coming back to Valley," said Danny Wilde. "The tournament is a tradition we are keen to maintain. It is very well received, not least because of our outstanding golf course, which always convinces and is an excellent test at a high sporting level also for the best players in Germany and also Europe."

"Best final round" for the men

Just as Helen Briem, the winner of the 2021 European Young Masters, also claimed the Valley title, her Young Masters counterpart, Munich's Tim Wiedemeyer, was victorious in the men's competition. He, too, had won the 2005 European Championships in Finland in July, and he, too, was successful in Valley. However, not by a start-to-finish victory, but thanks to an exciting as well as sporting high-caliber and ultimately successful race to catch up for Wiedemeyer on the final day of the tournament.

After 36 holes, Tom Haberer from GC Hannover and Philipp Katich from GC St. Leon-Rot, both members of Golf Team Germany just like Tim Wiedemeyer, took the lead. Both were four under par after two rounds, two strokes ahead of Wiedemeyer (70+72). What then followed in the final round was "the best final round I've ever seen," said father Torsten Wiedemeyer, who accompanied the reigning German Holes Champion, Young Masters Champion and 2021 European Team Champion on the fairway side. All three players showed golf at a high level, and after ten holes Wiedemeyer had closed the gap; the trio was now tied at six under par. The lead changed constantly as the players returned to the clubhouse, and the preliminary decision was made on the 17th hole, when Wiedemeyer scored a birdie on this par 4 with nerves of steel, while his opponents both had to record a bogey. In the manner of a champion, the winner closed the tournament a little later with a birdie on hole 18 and won with 8 under par and two strokes ahead of Katich and Haberer, who share second place.

"My putting wasn't that good this week, but I hit very good irons throughout and opened up a lot of birdie opportunities with that," Tim Wiedemeyer said of his performance at Valley. "That was really one of the coolest final rounds I've had this year," said the champion, "anyone could have won there. It was important to stay patient and fight at the same time." 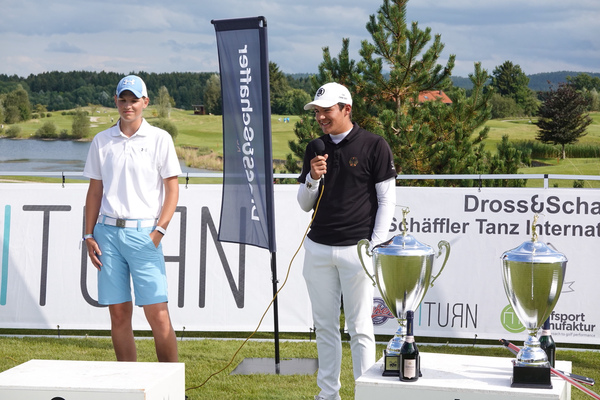 In addition to the title, which continues Wiedemeyer's impressive 2021 season, his development over the past 15 months is particularly impressive: in 2020, he finished 48th at the Schäfflertanz International Open, at 12 over par. Now, as in the women's Helen Briem competition, he has proven that he is currently the strongest player of the 2005 vintage in Europe. Whereby Wiedemeyer modestly waves off this classification: "Let's say I'm quite good at it."

Just how well he is actually playing will become clear next week, when the top player from the Munich Golf Club competes in the Jacques Léglise Trophy in Sweden on August 26 and 27, the prestigious comparison of the best young players in continental Europe with a team from Great Britain & Ireland. Wiedemeyer is just as much a part of the European squad there as his Golf Team Germany colleagues Yannick Malik (St. Leon-Rot) and Tiger Christensen (Hamburg-Falkenstein).

Whether it was the Ping Junior Solheim Cup or the Jacques Léglise Trophy, Valley was a more than worthy and in any case very meaningful dress rehearsal for the appearances of the 2021 champions, Helen Briem and Tim Wiedemeyer, on the very big international stage.